“The first of what has become a repeating tradition of bicycle tours of the Reid Brothers architectural works in San Francisco took place on 12 January 2008, led by Andy Thornley of the San Francisco Bicycle Coalition, starting at 1:30 in the afternoon (a fine, dry, clement afternoon) in front of the David Hewes Building at 995 Market Street.” I didn’t do the ride last year and only briefly stopped by, ran into Brad (above) also taking some snaps, as well as capturing Phi, who was featured in the “What to Wear” for Momentum magazine [link]

“The Supermarket Street Sweep is an annual bike race that benefits the San Francisco Food Bank! For the past four years, hundreds of participants have zipped around the city to local supermarkets and brought back thousands of pounds of food to donate to this wonderful charity.”

Saturday: santacon -begins at 10am Also santacon is this Saturday. Anyone going?!

Poster my favorite bicycle psycho cat, local fantastico artist Hugh D’Andrade
This year there is even a Pashley from mi favorite bike shop in the northside Citizen Chain. +about 20 bikes for silent auction. +much more. Way coool.
Remeber, there is always the outstanding valet parking service so you don’t have to worry about your beloved machine.
I super ♥’s winterfest!!!
+info here: link
– – – – – –
SO MUCH FUNNNNNNNN! ♥Friday: Bikes, posters, beers. be there!!

Valet Bicycle Parking provided by the mighty SFBC.
See you there! Saturday 10/23 from 3-6 pm
WIGG party present: Carrotmob!
Carrotmob is a type of consumer activism in which businesses compete at how socially responsible they can be, and then a network of consumers spends money to support whichever business makes the strongest offer.

These guys are up to something. And I like the sound of it, plus as if anyone needed another excuse to stop by the super cool Matching Half (!!!)

The Wigg Party is proud to announce that the next incarnation of the global phenomenon known as the Carrotmob will be happening here in our own backyard at the Matching Half Cafe on October 23rd from 3-6 pm. During these hours, Matching Half will commit a whopping 200% of their profit to making their business practices more sustainable. Yes, you read correctly: 200%!

♥Saturday | Day of the Dead at the Oakland Museum of CA.

I randomyl found this event, indicates no bike/accomodations, but seems quite easy to reach via BART and within walking distance around the East Bay.
++++
COMMUNITY CELEBRATION FOR DAYS OF THE DEAD Sixteenth Annual Celebration Oct 23, 2010 | 12:00 – 4:30 pm
Oakland Museum of California 1000 Oak St. Oakland, CA 94607
+info here: link

Sunday streets is here again. Yes!!!
Show the beloved TL some love, here is the map Frenchie was so floored at such sighting we had to take a little break by the Bay.
—–
Los Gigantes are back in town on Tuesday so stay posted with traffic/people crowds. and as always watchout for the #1 fan my friend KT around the crowd!
And that is the current state of affairs weekend dose 🙂
Share:
bike racks, eats, las neighborhoods in SF, valet bike parking

The other night I had a bite at Pika Pika. There is one rack right across it, but in the evening, after four barrel closes, you can find some open racks on that stretch. Or across the street at little star. They close at 10PM, so just in time to get a late maiz+frijoles snack and a beer. The stores are ready for Fall. The City and its moody weather, not quite =)

Just a reminder that the Bluegrass begins today, but there is no bike valet parking until Sat-Sun

♥ Sunday in Marin: Private Locust
via allhailtheblackmarket.com
“Be at the Java Hut in Fairfax at 9:00 and get a cup of coffee and sign up. We roll out at 10 sharp.” 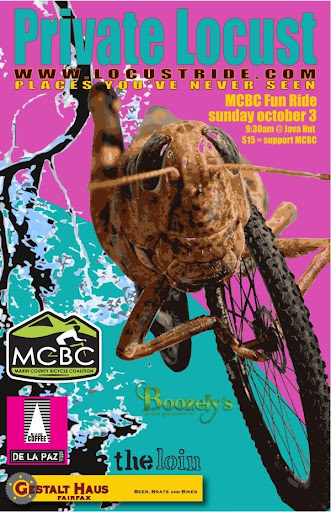 What: Sports Basement Sunday Ride
Beginnermediate Group – 43 miles @ 14-16mph avg. on the flats – (slower uphill) – no rider left behind. Wait at tops of hills and major intersections.
When: Sunday, October 3rd – Meet up at 8:30am for flaxy breakfast nuglets & juice – ride rolls out at 9:00am
Where: Sports Basement Presidio – 610 Old Mason St., The Presidio of San Francisco
Bring: Your helmet (this is mandatory!), a couple of water bottles, a little cash, an ID, a cell phone with saved I.C.E. contact, and a patch kit & tube.
Don’t Bring: Your ipod or any devices which plug your ears or impair your ability to hear. This is a group ride and we want to make sure that you are communicating with your group for safety and social reasons 🙂
Weather: Check it here to make sure that you’re properly equipped for the conditions.
Note: Riders under 18 years of age must be accompanied by a parent or guardian to ride with us.

The Unite Bike is taking place this Sunday, Oct. 3rd at 5PM in the Music Concourse in front of the California Academy of Sciences. [more info]
+info: unitebike website

♥ Sunday: Papergirl SF ride +distribution
Rolls out at 10AM from PUBLIC bikes in the soma.