nice article. have ridden the metro to/from dwtn-all over as a tourist, have yet to pedal elay ×

» “…To make a change in this city — a change in traffic, a change in emissions waste, a change in lifestyle — we’ll need a little hand-holding. And that’s OK.” – “How I learned to bike to work in Los Angeles” by Ali Swenson | LATimes

"How I learned to bike to work in Los Angeles" https://t.co/LJluQNBmNy

incredíble: this is crazy: man on bike delivery service delivers baby, in the middle of the day – san francisco…

Just wanted to share this incredible story my good friend KT shared [of velovogue and her new project velo visionaries] × more people like Esau in this world:

this is crazy: +people like Esau “My wife delivered two children. I saw doctors deliver them. My instincts kicked in…”…

I use ifttt for social media channels as I’m not as active on fb as much, but i love and perhaps understood twitter better, maybe bc I’m a news/arts articles junkie. is ok to not be good or active on everything, right ;^]

Anyway, how what a tremendous story. Have to read it to believe it, right?!
Have a great rest of the weekend.

wanted to take a second to share something just simple and easy in so much wrong, sad, unstable around the planet we live in.

i have certainly had a rather strong year of a somewhat affinity, to attend multiple local book talks as well as making an effort to get tickets ahead of time aka not-the-day-of for music shows that interest enough to get me away from home and the pj’s, the warriors or other basketball features.
so far, it has worked quite well.

i’ve found tremendous joy and peace observing in attendance, and even running into a few recurring faces with these book events, and music shows, or running into familiar book store clerks.
i have to start gettting better at finding more (more!) time to read all those books that are starting to pile up, on basically any flat surface around the house. not a bad problem, i suppose.

here are three sketches i wanted to share with you all.
Two from recent rock-author-bio lectures, and a music show. 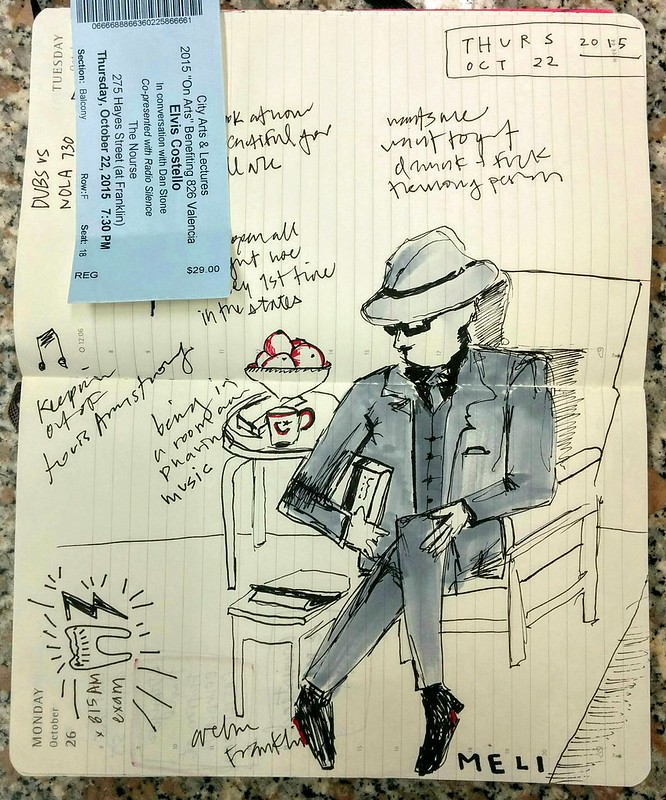 Elvis Costello presented his book Unfaithful Music & Disappearing Ink in the city, arts, lecture series here in san francisco. the Nourse theatre fairly recently reopened (to me, 2012) after 30+ years or so. the lecture was incredibly pleasant. the venue is classic though many components new and rennovated, absolutely beautiful.
He sang close to a handful of songs at the end. an absolute treat.
The night concluded with an improvised quick friend dinner date afterwards at a nearby greek restaurant in hayes valley, very nice. 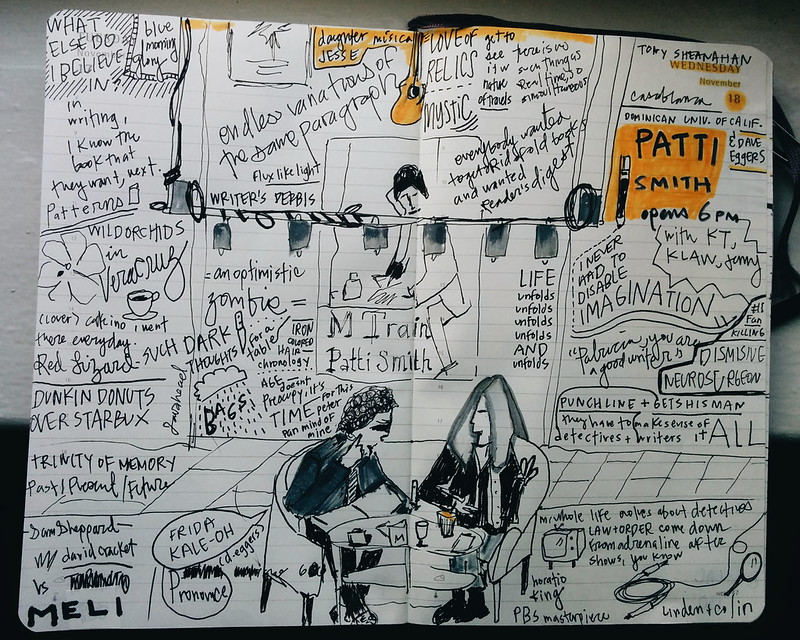 Patti Smith presented her book M Train. It was so great and sincere.
We had an all-gals nite out, and it seems that we were not the only group to plan that.
A very high ratio of women:men, in the beautiful angelico hall – an old school wooden building in the dominican university in san rafael. it was just beaming. Patti ended the night singing a few songs as well, and it was super. 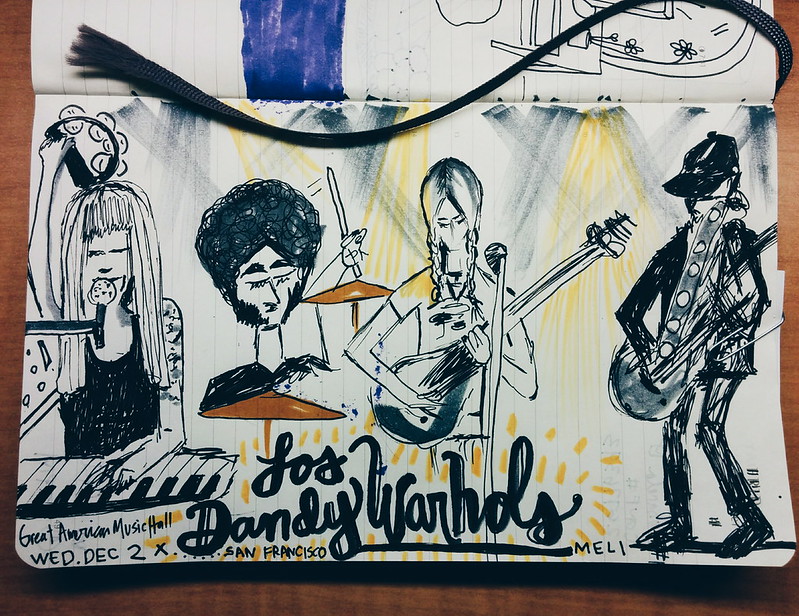 the Dandy Warhols played twice this week at the great american music hall, i attended the wednesday night show.
it was a nice, fun time out. they are very light and easy and the audio was good. i wore mi old bjm shirt and caught only the end of joel gion’s band, which i have now seen several times. two beers were had.

a note: it was really cool of them to share mi little drawing on their social media thing one and thing two.

thanks for stopping by.