LIFE is fragile.
Somedays are tremendous; often sad, often joyful. Often both. What a mysterious ride.

Taking a short time off from the blog +sharing fotos to embrace changes +some time off social media.
Will be back in about a month, happy mother’s day, and will be watching my Warriors rocking the basketball playoffs.

See you all in late-May.
Much love -xxomeli

mucha música Monday: on the radio

One of the things I often, if not daily, is “I heard it on the radio.”
Even if I can only catch it for a few minutes, I try to listen to the radio everyday.
I like finding out events, some news, music +unexpected interviews. It keeps things interesting, fresh +a bit random.

Some of my local fave stations/shows I try to listen as often as I can:
KPFA 94.9 “Rock en Rebelión” Sundays
KPFA 94.9 “La Onda Bajita” Fridays
KPOO 89.5 out of the Western Addition
KNBR for some sports updates (I was an avid Barbieri follower at some point)
KALX 90.7 CAL I do forget about it, but I used to religiously when I worked in Berkeley a few years ago.
KCBS 740AM newsnewsnews

Others possible by the internet with listen-now links:
KEXP in Seattle: their Sonarchy show available as podcast is my favorite
KCRW Santa Monica/Los Angeles in particular Raúl Campos
89.3 The Current in Minnesotta via their youtube channel.

Anyways, that’s my curiosity path to continue to explore, divert +listen to some different happenings through a not so old +I sure hope never-to-be obsolete form of communication, the radio. I do miss KUSF, however. Anyone else was also a big fan of DJ Schmeejay in the mornings?
OK — onto la música:

Peace: Ocean’s Eye & Follow Baby
First time listening to these British young band on KCRW a few weeks ago. Like them so far. Their album dropped over a month ago “In Love”. Clever junction of band name +album title, right.

Brainfruit
I was catching up with some of the Sonarchy archives from KEXP, when I heard a set by Brainfruit. You could even read a book if you needed this as copmany background noise. I enjoyed the 1hr set, though here is a shorter one I found through their bandcamp site:
http://bandcamp.com/EmbeddedPlayer/v=2/track=4172119985/size=venti/bgcol=FFFFFF/linkcol=fbed60/

JD McPherson: Dimes for Nickels
Here is cool live performance recently shared by @DirtyCyclist of KEXP in Austin for SXSW, broadcasting from the Mellow Johnny’s bike shop:
thanks for sharing!
Phantogram: Don’t Move
I fell in love with When I’m Small in 2011. That black hair, black tank +all that um bouncing, as well as his beard. Ohmy. They have that pretty modern-ear candy sound +layered live, I must say I’m a fan.
[file under] → M E S M E R I Z I N G  M O N D A Y…

What’s your favorite radio station? Do you have any radio rituals?
Hope you enjoyed this radio segment as much as I putting it together.
xxom

under the golden gate bridge

Embracing a peaceful moment under the fog blanket with a sea layer scent, good for the mind. have a bonito fin de semana/good weekend a todos/you all <3 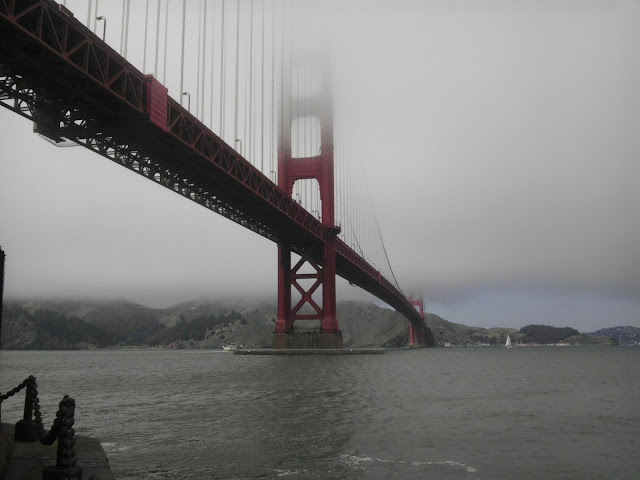 Los events: for the weekend SF Yellow Bike will be starting our first series of FTW – Femme, Trans/ Gender Queer, Women’s Shop hours. SFYBP feels this space is important and acknowledges existing power structures that can be barriers to many in the community.

These shops will be held at YB HQ, 25 Division on the 2nd floor. Our first of this series will be the following:

Here is what I’m currently reading/to-read list +a few recent new additions to my bookshelf: A couple of Burma to-read pieces by Emma Larkin. This bookworm ♥’s the SFPL. These two book stacks fotos were inspired by bloggie pal from Tijuana Velcro/ZiaZia A few I’ve recently completed, or are almost done with:

✕ Sagan’s Billions & Billions subtitle is” Thoughts on Life and Death at the Brink of the Millennium. It’s a great math+life book.
✕ Sway is a fictional novel about Brian Jones +the Rolling Stones. Having read Life by Keef, I’ve found the novel rather hard to get into asking, like, how does the novelist really know this could’ve gone through their heads. I been jaded by Keef, that I know.
✕ Anna Karenina is part of the book club with my GFs, interesting but not quite a personal choice. Getting to its half point as a milestone has been kind of a reading effort, I must say. Romance is not quite my cup of tea.. but have enjoyed it so far. I am very grateful to have received the above 2 fashion books over the Holidays. Pretty amazing, a present large format to make a clear statement +an infinite source of inspiration. McQueen’s book is a lenticular trippy cover, I love it.

There is a connection about World Book Day +Don Quixote de la Mancha, Wikipedia indicates:
“The connection between 23 April and books was first made in 1923 by booksellers in Spain as a way to honour the author Miguel de Cervantes who died on that day.” [World Book Day on wikipedia]

What books have you read lately? Feel free to share any recommendations 🙂
xxom

The Vaccines: Blow it up
Pretty cool they are playing soon in DF: Mexico City in May

Tripple N-ples: Off the dancefloor remix
Lunatic delusion party! From Tokyo, Japan
→ → NOTE  The video below is NSFW so here is their stream, for safer measures: on soundcloud

Iron and Wine: Joy
Can’t say I’m a fanatic of their music much, BUT I find this video quite beautiful +well crafted. Image quality +its crisp textures are pretty out of control. Further reading/watching: the making of – via thisiscolossal

Iron and Wine "Joy" from Hayley Morris on Vimeo.