Exclusive clips of the movie will be enjoyed by all!
Oh and most importantly, the Kickstarter fundraiser launches that night!
Even if you can’t make it to the party, you can help fund the project.
Like the FB page for updates: facebook.com/thespinstermovie
›› The Spinster official Kickstarter page

To the man in black: Happy birthday, Johnny Cash.

John R. “Johnny” Cash was an American singer-songwriter, actor, and author who was considered one of the most influential musicians of the 20th century. -wiki

“I’d like to wear a rainbow every day, and tell the world that everything is o.k.
But I’ll try to carry off a little darkness on my back.
Until things are brighter, I’m the Man in Black.”

Counting the days to get a set of his stamps.
Date of release not yet known.
Hot. Damn.
The forever stamp, which will be square to resemble a 45 rpm record sleeve, is based off a photograph of the “Walk the Line” singer in 1963, as he recorded “Ring of Fire: The Best of Johnny Cash.” The stamp will be released later this year and will cost the same as any other stamp — a newly raised 46 cents. –Johnny Cash to grace new postage stamps via CNNMoney. The best thing I found in Hollywood, asides a dark cool dive bar, with cold beer and a Keith Richards Shrine. It does exist, and we found it – not far from the main touristy Boulevard stretch.

—
I find it very, very easy to be true

I find myself alone when each day is through

Yes, I’ll admit that I’m a fool for you

I’ve started to play a significant amount of Johnny Cash again in the last few weeks.
Comes and goes, but has mostly lingered for many years.

[  L I N K S / F U R T H E R  R E A D I N G  ]
These are a collection of my bookmarks, evernote and favorite finds on the internet. None of these are affiliated – all is unfiltered, not sponsored and I share it because I love this shit.

+ “I’ll be your Emmylou and I’ll be your June If you’ll be my Gram and my Johnny too” First Aid Kit “Emmylou”
+ The Johnny Cash Project
+ TIME 2012: Happy 80th Birthday, Johnny Cash: Rare and Unpublished Photos of the Country Music Icon
+ Pictogram Rock Musician Posters by Victor Herz
+ Photos of Johnny Cash in Tennessee, 1969
+ Jeff Elder describes an impacting moment on Medium: The day I sold books to Johnny Cash.
+ BrianPickings: Shel Silverstein Duets with Johnny Cash, 1970
+ You look so money — Johnny Cash | slicked back style of the ’50s & ’60s
+ You can never have enough Cash: Johnny at Folsom prison 1968
+ And last but not least, the duo of badassery, Cash & trains: Johnny Cash Ridin’ the Rails

As a teenager I didn’t know where Jackson was, but I knew I wanted to go to Jackson.
Which are your favorite singles? Or favorite memories while listening a song?
Knowing my audience quite good, I know that at least one of you got to see him in concert, perhaps before I was born..
xxom

Psychic Ills: One More Time
Psych rock to cheer up any slow morning, or night.

YeahYeahYeahs: Mosquito [teasers]
The best to come out of an Oberlin / NYU connection. Their Album drops in mid-April.

Ñaka Ñaka: Vuh
Repetitive spacy music from the Mexican producer Jeronimo Jimenez, based in New York.
Good to listen to while checking off emails or whatever mundane stuff happens on a rather slow Monday morning.

Bleached: Next Stop
When I first heard this I thought it was a collab or something to do with Bethany Cosentino (Best Coast). Very 80’s softer than the Ramones and faster than Blondie. What do you think? They are playing in SF in a few months.

Shonen Knife: Pop Tune
Let’s end this set with a high-energy song to begin the week, sent in earlier this month by a fave long-time reader Jon C.
Those birds peeking-in randomly are just too funny 🙂

Here we are now. Entertain us.

Mi wise go-to man, resource +archive of all things local music +radio, has this to say about the early 90’s Kennel Club:

Johnny Depp (in “Benny & Joon”) as I do wear a hat rather frequently and my hair is super messy lately. BTW I love that film.
Alicia Keys while watching the Grammy’s, Janet said I remind her of Alicia’s recent looks and her overall appearance and attitude.
Björk from a very cool sidecar driver in the city (Sidecar is a ride-sharing app, based here in SF).2 from people very close to me and 1 from a stranger. 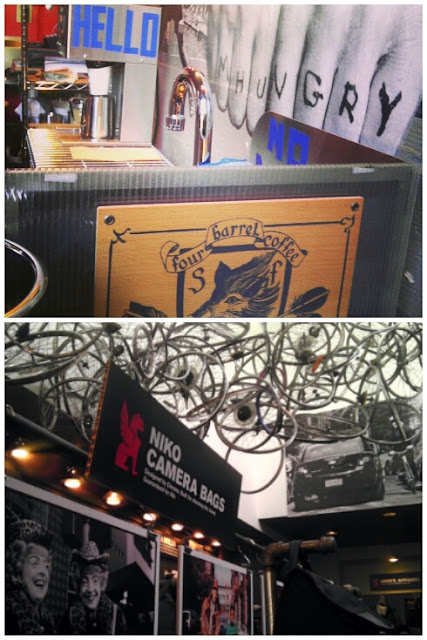 Iron Butterfly: Manhunter Came across this interview with John Cale of the Velvet Underground. Thought I’d share. “Whoever wants to sing a Nico song has to approach it from the right point of view. There’s a lot of love for Nico on that stage, they all really appreciated her for being a songwriter, not because she was the gorgeous member of the Velvet Underground. It’s a different approach.”

Salt Cathedral (formerly Il Abanico) : Take Me to the Sea

Milkman ft. Gil Cerezo & Billy Mendez: Oro In the late 90’s I was pretty crazy about the latin/techno-music Kinky from Monterrey, México. The frontman of the band collaborated with a few other well known dudes for this single. Gil used to date Mexican music goddess Ely Guerra awhile back and he was at her show at the Red Devil Lounge on Polk street in 2005. Not sure what the style of this new project is, a bit wacky and the lyrics are rather silly but fun.

Here is the beautiful Ely. I took this foto at her show at the Independent, in 2010: