Cafecito chronicles: Of morning coffee and the solar system. 7:52AM
Monday Nov. 4th. San Francisco, California.
I began to wonder if I was going to break a sweat as soon as I set foot in the coffee shop.
My black wool sweater has been cleaned over the weekend and has no sign of floating lint patterns or Velcro cat hair. Black patent boots. And that black wool dress that has been to date my favorite consignment find.

The windows are as steamy as that one scene in Titanic, and I can’t help to think of that puberty-soft skin Leonardo must have had.
“The usual, Meli?” she asks.

I have moved on from the steamy adolescent lingering thoughts and started observing fellow patrons as I make my way to the espresso machine to pick up my drink which will be ready in a few minutes.

The vulnerability of people waiting for their morning fix is unique.
The wet hair. The occasional lack of planning which becomes everybody’s emergency.
The spills.
And the grinder goes off again.
This will be my second cup after the one brewed at home. It is a few minutes before 8am.

I usually run into this guy who wears all-Giants gear, all the time.
When I’m not looking, he stares at my Athletics pin on the left collar tip of my summer jean jacket as if he is disappointed or something. Or maybe stares at my chest, I couldn’t give a fuck. He is harmless and has no idea the espresso machine is shiny, like a rearview mirror. I’ve watched my share of surveillance movies and television shows.
He’s not once talked to anyone other than the people who work behind the counter.
I was not wearing my jean jacket, and neither was this dude there today.

As I waited for my drink I walked towards the southeast corner of the shop.
I continue to observe and randomly exchange looks with whoever is making my coffee. I don’t have an urgency to look at my phone at all. I have a fond of appreciation of moments that some might otherwise consider insignificant.

“Your look – Your colors” he said as he figured-8 his right hand over his face while shifting his New York Times section away from him. “You ARE like a planetarium” slowly bringing his right hand back to his coffee cup.
I was unintentionally wearing all black today and all the color that accompanied me was my purple (lavender, as my barista crush at this same location likes to call them) sunglasses, earrings and lipstick. I was a bit confused but mostly flattered. Did I hear that right? I thought, a rather peculiar and playful choice for an adjective.

“Why, thank you” I responded. I complimented him on his coat, his poise and I asked what article he had enjoyed the most this morning. We exchanged a few words about Julie Taymor and shortly after he handed me his business card.
He looked at me with a pensive vibe, and kindly asked if I cared to join him for coffee and further NYT talk. I said I had to go to work and couldn’t stay.

I reached over the counter for my drink, and saw the barista –we’ll call him Nick–.
In my mind I blow him a kiss as I reach over the counter, and wish I had met him when I was 21, but in real life I can hardly manage to say thanks and grab my drink without spilling it all over myself trying to take the first sip.

“Did you get a haricut? –ohwaitttt, oh OK I know– I don’t think I’ve seen you without a hat in months” Nick said.

8:02AM
Left the planetarium.

✚  |  DJ Equal: Lost in the Evening
DJ Equal is from NC, based in NY. I found this pretty good listening to this after my 3rd cup of coffee and before noon. good balance of mellow and modern hip soft talk from what sounds like a young 20something voice. I’ll take it.

✚  |  Trails & Wails: Nunca
Found out about this band, playing in November via the NewParish email newsletter, cool stuff.

“we are four people and we write pop songs out of dreams and mistranslations. after we met at & graduated from Berkeley, Emma lived in Spain, and Keith in Brazil. at start of 2012 we were all home, full of ideas & obsessions for new words & sounds we’d learned, and we made a band. we all sing & write together, in lyrics crossing between spanish, portuguese & english.”

✚  |  The Mountain Goats: Scorpio Rising
–Mercury retrogade returns: “Give yourself the time, space and attention to feel.”– via AdrienneVita

✚  |  Warpaint: Love is to Die
Yes, a new single is out. I found this band via that one song Elephant a couple of years ago and liked them so.

✚  |  Warpaint: Elephants
ok this is the one. Undertow is also pretty good.

✚  |  Paul McCartney: Queenie Eye
mamigrosa made me look up Sir Paul’s new song the other day, she loves him.

We wish you had a safe and fun halloween. 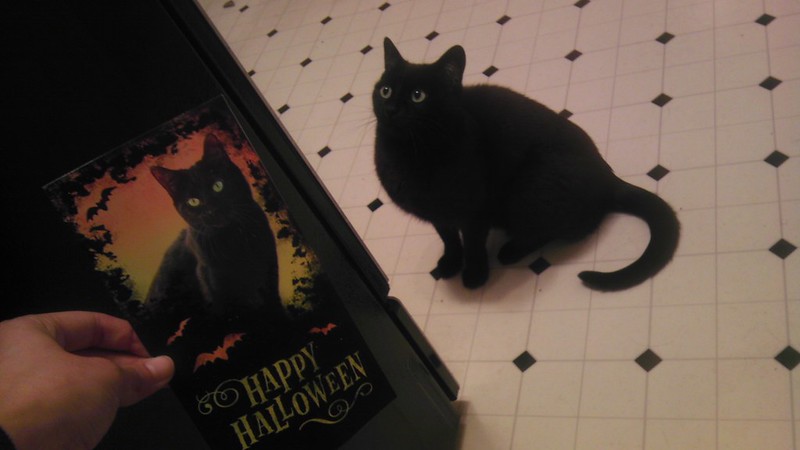 –beautiful card—
The real treat today was to have lunch with Eric, and have dinner with KT.

—
hope you all eat lots of candy.
cheers, friends ♥xxom