Bikes and The City in collaboration with BikeNOPA, brings you the weekly series: Dads on Wheels. Every Tuesday, we will be featuring dads from all over the city, and the ways they get around town with their kids.
Please check both our blogs for the current profiles.

Let us know your thoughts and leave comments for the featured riders! Dads on Wheels: Richard
How old are your kids and why do you bike with them? When did you start them biking?
Ivy is a pre-teen, my son Ian is a teen now. They’ve been riding in bike trailers since they were toddlers.

How often do you bike with your kinds now ….and do you bike with them for fun or also for taking them on errands, getting them to school?
Ian gets around town on bike by himself with no problems and knows how to use the bus as well, though to be honest he really prefers getting a ride in a car. I even had to ask a friend’s mom not to give my son a ride every time he asked!

Ivy and I go to the local farmers’ market, dog park, and shops by bike, and Ivy came along at a recent San Jose Bike Party.

As a family, we’ve gone camping by bike, biked across the Golden Gate Bridge to Sausalito, and spent a weekend Sacramento via Amtrak, where we biked up and down the American River and around the downtown.

What makes a route or street OK for taking your kids biking on it?
I’m an assertive cyclist, but children don’t have the experience they need to bike in heavy traffic. They don’t anticipate the ebb and flow of the road. Many children, for example, will stop when they see a large vehicle approaching in a cross street, even when they have the right of way. When cycling through dynamic traffic, I stay behind my daughter and give her instruction on where to go, when to merge and so forth. I also act as a sort of human safety flag, staying visible and running interference for her.

I’m not ready to take my daughter cycling on (for example) SF Market Street, even with all of the bike facilities, where someplace like the Embarcadero works very nicely. I wasn’t much older than she is now, though, when my friends and I were biking in impossibly heavy urban traffic that would have concerned my parents if they knew about it.

The perfect route or street for biking is maybe the dead end cul de sac in the suburbs, but that kind of development is precisely what gets us in trouble with long commutes and dangerous driving!

Is it even harder getting kids ready for trips if you’re traveling by bike?
I open up the garage, grab the bikes, we hop on and go. Every once in a while I need to ensure bike light batteries are charged up and the tires are pumped, but these maintenance issues are no more onerous than checking the oil in a car.

I’m not car-free, but I’ve been biking to and from the office just about every working day for over 20 years now. When either of my children come to work with me, they do the same bus / train / bike commute as me.

Any advice for other dads who are thinking about biking on their own or with their kids?
Don’t start out with a 40 mile extreme adventure — they’ll hate you and cycling forever. Instead, start small with a ride to the corner store and make the experience fun and worthwhile. Give a small reward after the ride. Don’t sweat the time — we break frequently for ice cream, snacks, drinks, banana slugs and other fun stuff.

If riding in cooler or wet weather, make sure the kids are dressed appropriately — smaller children lose heat more quickly than adults do, especially if they’re towed on a trailer. You might be sweating at 60 degrees while they’re shivering from hypothermia. a mixtie and a fixie

Sketchy in black and white.

My two favorite abstract shots of Amanda and Constance from our Dr.Sketchy’s event back in May. With love from: bici love everywhere!!

This is dedicated to a few awesome peeps that have sent me little bits of rad things in the email/postal box.
♥gracias all!

++++ Santa Cruz, CA
Alejandro sent me this shot from his hot weather roamings in Sunny Santa Cruz. I’m overdue for a little weekend trip there +catch up with my brother. What’s up SC

++++ Sonoma, CA
This video is SUPER. Have any of you done this?! I’m into it. Anyone wanna go to a picnic with me?! I bring the cheese, you bring the wine+the pump.
Thanks to Natalie for the tip.

++++ Sacramento, CA
Many thanks to sweetheart Lorena from Sacramento’s fashionable blog: Sac Cycle Chic for sending me a pin to add to my bikey international collection on disintegrating jean jacket =) 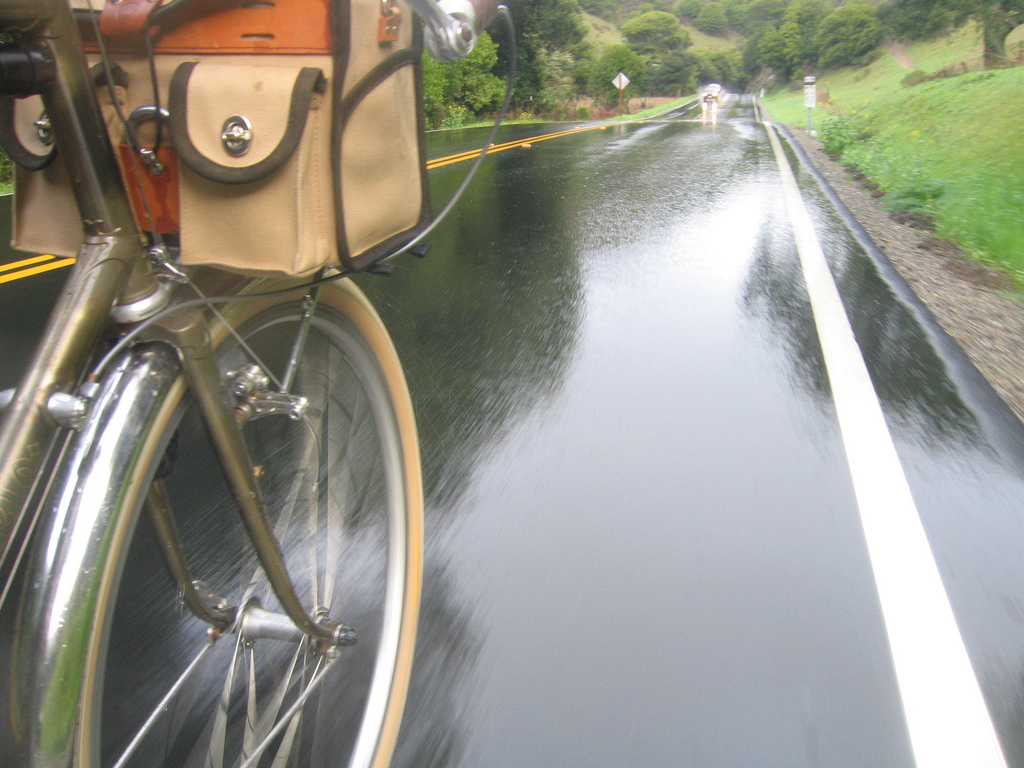 A very well written piece about bicycles and where we are headed. Thanks for the mention about the blog I collaborate with 3 other bicycle women (Change Your Life. Ride a Bike!) and Esteban’s observations about oil and our progress as citizens of this world.
Read it here: Pedaling through the Transnational Public Screen Esteban del Rio / University of San Diego

++++ Seattle, WA
Butter Bill goes to Seattle and he better had his taste of the coffee up there in that pike+pine lands of the north.

++++ Hong Kong
All images part of P H Yang’s post and CNN iReport: Over 900 Ride For Climate Change
So cool! I love that lady in the blue cap. Awesome!

++++ Berlin ,DE
And this is pretty awesome.
JLF has found my secret German life.
Comes at no surprise riding bikes, bloggin and having a coffee shop, what else!?

image from somewhere in the interwebs -JLF SSSSSIKE. Just making sure you’re awake on a Monday morning
—this is from an event at 111 Minna, San Francisco Califas.
Get out.
Share:
art vitamins, boys, hawttt, las neighborhoods in SF, newspaper/media, qué cute

In print: local poems by Donald I was very happy to receive issue 10/50 of “Shine in ’09” by Donald —- a sparkling local little book of poems, and bikes. Takes place in San Francisco.

The first time Donald showed up to butterlap, he let me know he had found out about it through my posts, so I thought that was rad. A few weeks after that, he handed me this book, so I’m sure he’ll be happy to see it posted here.
His writings mention plenty of spots you will more than likely recognize. Reminds me of riding in my white boots and impromptu make-out sessions by maggie mudd’s. It’s pretty good. (If readers ask, and if you happen to drop-in the blog, let me know -if these are sold- where they can buy a copy)
♥Gracias, Donald!!

This week I’ll be posting local and commercial prints that I have been gathering and/or come across and been wanting to share. I love print and I keep/collect/exchange/donate/recycle these, depending on each individual item. Thought I’d share the love. Cheers Mi mom got me a copy of this October Lucky magazine. I have browsed these Lucky magazines when I go to the dentist, and it is usually about past seasons, but it’s kinda fun to see the thousands of shopping ‘suggestions’ that I never knew existed. I have too much fun in vintage stores but anyway, below are some pages that caught my bikey eye. Nothing too new, bikes in commercials and ads have been increasing their popularity and I’m all for them. Any exposure is good. Well maybe not the credit-report commercials mocking the fact that because you can’t get a good credit score, you don’t get a car therefore you ride a bike. Aggggh. Ok, nevermind – back to magazines. Stiff as leather. Why so serious?! Make-out city. People with bikes kiss better. That is the message. She’s cute, but my eye goes straight to those parked bikes back there.

Bicycles in ads, wish they felt less posed and more real, but I got my gReader and the awesome blog lists to get my dose of wonderful real peeps on bikes. And if some celebrity or models are actually riding a bike I’ll spot it on dlisted or cyclelicious celebrities posts.
This issue will be given to a friend or recycled. Ding-ding =)