from the bike lane, fun, las neighborhoods in SF, ride on, rides The ladies are ready to ride.

I was happy to finally join the Pushbike’s ladie’s ride. I think is a great ride and it happens every two Thursdays or so, starting from 24th/Treat st. The route always changes and this time, we headed up the wiggle, out by the Lake st./Presidio side to kick it by that little cute lake, then returned via the Richmond and through the panhandle. Good weather and great pace along with bicycle ladies 🙂 excuse us – we got a ride to start. Octavia/Market intersection is now overtaken by the ladies. Somehow I always end up in the back. I enjoy checking out whats going on and taking my time. Dark knight riders. North-east of golden gate park.
‘Til next ride. It was lovely meeting/seeing you again/ chatting with you all. ‘Til next time XO♥m

With love from: Malaysia

Thank you so much Khairul, for sharing this great picture!! This photo was taken in Kuala Lumpur
♥Greetings to all of you readers, bikes enthusiasts in Malaysia. Terima kasih! I am from Malaysia and I’ve been following your blog. You have beautiful photos of bicycles and various locations of you beautiful city. We in Kuala Lumpur are still zillion years away from becoming a bicycle-friendly city 🙁
Attached is a photo of my Japanese-made roadster and my beautiful son.

Things and Thoughts on Tuesday: Waiting. This Saturday, the Mission’s area of 25th & Folsom, converted itself into a food beautiful chaotic orchestra with a moving sea of people, a myriad punching smells going through your nose and your stomach really not knowing what to do with it all. The San Francisco Street Food Festival had an amazing turnaround, the vendors kept saying, was way more than they had expected. Great cause, excellent collab. If you missed it or found yourself impatient, don’t worry – there will be more happening with our neighbors across the east bay soon:

“The festival is a sister event to the Eat Real Festival, which will be taking place in Oakland’s Jack London Square August 28 through the 30, 2009.”

But, that said it was worth the wait, I think so. We were very-very hungry by the time we were closer to ordering, but very enjoyable. It was a bummer though, that they ran out of whatever beer was meant to be sold (tickets were $5 each) and ended up replacing it with cans of budlight… Anyways.
There was also the lush bike love aka bike valet parking provided by the SF Bike Coalition. Swoon!! Two seconds ago, there was the cutest chihuahua in the cutest pannier. ‘almost’ there… Okay this crowd, multiply it by 12. Peoplesesesesses 
This above is from El Huarache Loco. I love nopales, & it had been awhile I hadn’t had any huaraches (think of a thick tortilla 2x with beans in the middle) in a while and it is a sweet reminder to get out to the Alemany farmers market more often, which is where you can find them every Saturday.
Good times!

Sounds insane, but after Street food fest, we were hungry for more… Well riding around, hangin out with friends, catching up with peeps, riding all over for coffee requires some major weekend nutrition. What can I say. if street foods wasnt enough, we had to make a secondary lunch.
Apple goat cheese pizza a 2x americano and some good wired reads.
WHy is brad pitt everywherrrrreeeeeeee?! Lately, the theme seems to be closed-eyes. Cloud we made with picnick.


So later in the afternoon, the coffee tank was running on E, so we stopped at Atlas Cafe. There was a cute trio singing. There’s also bluegrass music every Thursday night, which I have not been in years, but having some pizza with live mellow music on Saturday was a treat. Cheers! Hambone in the interwebs part 2 & beautiful SF in the NYT

Just recently, I had posted a link to Lisa Marie’s Hambone Designs in the media. Thanks for her comment-update, she informed me she was featured in the New York Times!! Wow so cool.
Go Hambone designs, and what a wonderful picture of our own very adorable fog city skyline (taken from Dolores Park) with a beautiful bicycle, Lisa Marie and one of her designs. ♥Ride on girlfriend!!

New York Times | On To Plan B: Starting a Business 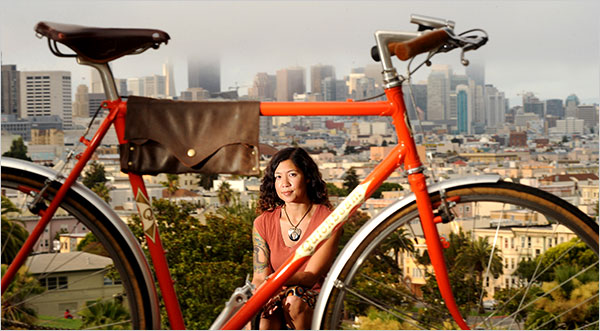 Picture by Noah Berger for The New York Times
Share:
the frenchie

Taking a different route even within your area, is always interesting. Take a different approach, explore your city, leave your city, make new friends and take some pictures. Bring your bike. Happy weekend everybody!